Scientist have found and confirmed a link between “gardening” Damselfish and coral reef health.

Coral reefs are key areas of biodiversity in our oceans, with all their inhabitants contributing to their health or protection. However, a recent study concluded that Damselfish, known for their algae-gardening abilities, can actually lead to the degradation of coral reefs and their delicate ecosystem. 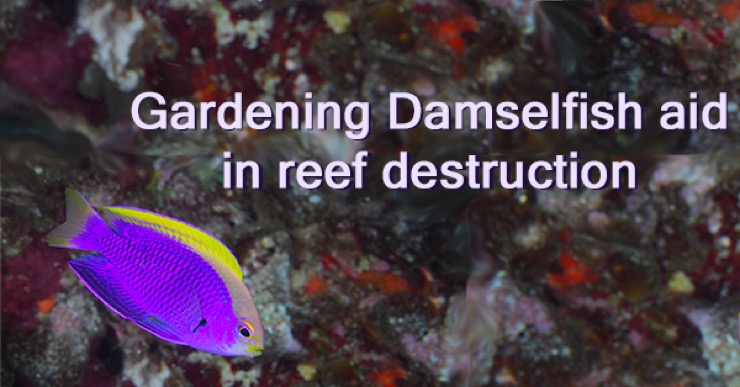 A link has been confirmed between the "gardening" activities of Damselfish and the health of the coral reefs.

Now, before we go blaming certain fish for reef destruction, it is important to note there are many other factors at play.

What is a healthy reef?

Ideally, coral reefs contain a collection of colonies of coral polyps. These are the microscopic coral living inside the calcium carbonate (limestone) shells. Since coral can't photosynthesise themselves, they work together with microalgae. The microalgae provide the coral with the nutrients they need to survive and in return get shelter. Sponges and other forms of algae also attach on to the same limestone skeleton that the coral does. Coralline algae can even grow into small tree-like structures. Working in relative harmony, coral and algae provide the backbone for more than 25% of marine life.

What is wrong with algae?

When coral and algae work together the reef co-exists. Commonly, a coral reef that has at least 10% coral with less than 5% fleshy macroalgae, is considered healthy. But if the macroalgae takeover, they can limit coral growth. The crossover from the dominance of coral to microalgae dominance is a key indicator that a coral is deteriorating. Once macroalgae begins to out-compete the coral, it can send the coral into a depauperate sate. This is where there is less diversity among the species present, similar to a monoculture. In these conditions, the coral finds it much harder to survive.

How does the algae takeover?

There are many factors that lead to an increase in this macroalgae. One of the main ones is a change in the nutrient concentration around the reef. Nutrients that are not usually present in the reef environment can enter through bad wastewater management. There can also be leaching of chemicals from the agricultural industry into nearby water. Due to unregulated coastal development, the ecosystems which would usually filter the water have been destroyed. There has also been a massive loss in acroporid corals and Diadema urchins due to disease. These creatures feed on algae thus keeping its growth under control. This is combined with overfishing, which has a knock-on effect that could not be predicted. A loss of fish that are common predators has resulted in an increase in fish populations that would have been the prey. This brings about a lack of diversity as certain fish are more resilient than others.

So do fish garden the algae?

Yes. By farming, you would imagine they go out to plant and tend to their crops, and this isn't far from the truth. Damselfish have evolved to actively farm fleshy macroalgae. As 'farmers', they help the growth of algae in many ways. First, they bite and attack coral so that it is more suitable for the algae to grow on and also more susceptible to coral diseases. This can help them create algal lawns, reducing the diversity of the area, which they further cultivate with their nutrient-rich poop. They also defend their gardening territory from other fish; leading to a further lowering of biodiversity in these areas. This is where Damselfish contribute to an already complex problem. While this is a smart thing for them to do for their own survival, this farming behaviour contributes to the degradation of the reef. 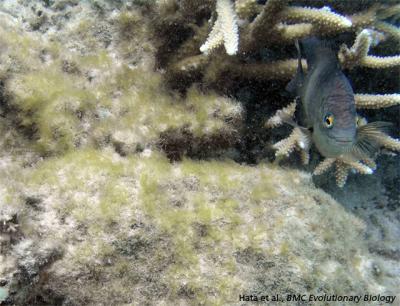 Of course, the Damselfish are not to blame. Without pollution, there would be less algae-supporting nutrients. Without overfishing, there would be more natural predators to control the Damselfish population. Snappers are one of these predators and their population has the greatest correlation to live coral cover. The opposite can be seen to be true for Damselfish. They are so linked to algal growth that it is possible to predict how many Damselfish would be in an area based on the number of fleshy macroalgae present. Previous reports also noted that Damselfish populations provide feedback towards fleshy macroalgae populations. Because of their increased numbers, due in part to less natural predation, they can definitely contribute to lower reef health.

Overall, this interaction between predators, prey and invasive macroalgae, is very complex. But it is key in demonstrating how areas of no fishing are so important for the protection of healthy coral reefs. In these areas, natural predators are allowed to spawn and thrive. This leads to larger biodiversity and no algal takeover. Biodiverse areas are also much more resilient to climatic changes.

Resilience can be defined as the ability of an ecosystem to adapt to and survive changes. It is so important that one of the UN aims is to strengthen the resilience of marine and coastal ecosystems by 2020. However, one issue has always been that survival of an event or situation is not always done in the healthiest of ways. This is known as "wicked" resilience. It can be seen on even a societal level, where people are caught in situations which are bad for them, but they are unable to escape. They survive, but their mechanisms for doing so are often unhealthy. This can also be applied to coral reefs. It could be argued that at least the fleshy macroalgae, and the Damselfish that tend them, are thriving. They are therefore, showing resilience to the changing climatic conditions. But their lack of diversity and contribution to the further destruction of coral would class their resilience as "wicked". Dr Glaser argues in her paper on Breaking Resilience that to manage resilience effectively, sometimes the systems that are in place have to be disrupted. This is to prevent "wicked" resilience from continuing.

So what can be done?

There are many ways to combat this problem. Protection for Parrotfish is spreading across the Caribbean coast. This herbivorous fish is key to maintaining the algal population and has been a victim to overfishing in the past. As for other algae-eaters; the Long-spined Sea Urchin (Diadema) may be reintroduced. It saw a dramatic fall in population 35 years ago, but breeders are working hard on its recovery. Pilot studies have also begun on Caribbean King Crabs, however, their importance to reef maintenance is not yet fully known. Ongoing research into the stressors and interactions within coral reefs is also important. Finally, and most interestingly, trained divers can actively go out and weed the reef! This is done by removing the macroalgae with a hoover-like contraption. Combining this with protecting the natural reef herbivores should kickstart the healing process.

There are many complex relationships within a coral reef, from predators to prey, to the symbiosis of coral and algae. Without fully understanding them, or at least attempting to, we can't begin the important work of conservation and preservation. Thankfully, there are many wonderful scientists doing just this, beginning to guide us in the right direction.