Following in the footsteps of Marriott Hotels, InterContinental Hotels Group (IHG) have opted to ban the use of miniature plastic bottles.

Are you used to stocking up on your shampoo at the end of a hotel stay? Have you mastered the art of “the sweep” (deftly swiping all the miniature toiletries into your bag moments before check-out)? Well no more! InterContinental Group has announced they aim to scrap all miniature bottles from their hotels by the end of 2021. 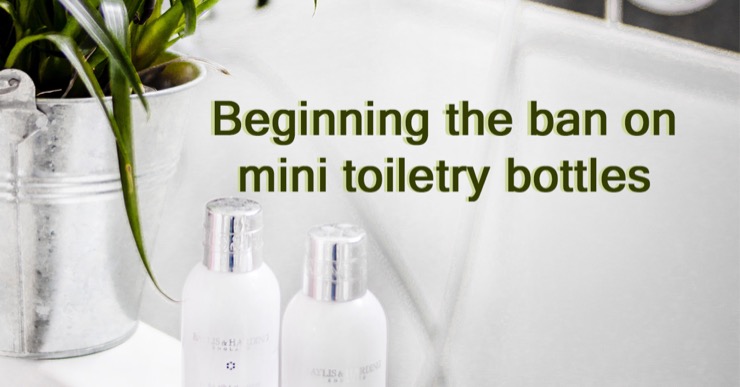 But fear not, they have a plan in place.

Marriott hotels paved the way last year by banning mini plastic bottles from over 1500 locations in North America. They calculated that each hotel used up to 2300 of these bottles per year. By banning them, they have prevented over 34.5 million bottles or 170 tonnes of plastic from entering our oceans or ending up in a landfill.

When Marriott merged with Starwood Hotels & Resorts in 2016, the solution was brought to them. Starwood had been using wall-mounted dispensers in some of its locations. This has now spread across almost all of Marriott International. The dispensers are said to be tamper-proof and designed so that staff can easily see if they need refilling. Learning from this, the InterContinental Group is looking to switch to ceramic containers, bulk dispensers and refillable bottles.

Not only are the wall-mounted dispensers said to work better; no more jumping out the shower when you forget to bring the tiny bottles in with you or asking for more bottles if you have long hair, but they also come with savings. Marriott has reported saving roughly $2,000 per hotel per year through this scheme, which is roughly $3m across all their hotels. While this $2000 saving is not much compared to the budget of hotels, it is very much in line with the proposed fines California Lawmakers are trying to introduce. As a move to reduce plastic waste, a bill has been voted on to ban the distribution of bottles 340ml or under at “lodging establishments” from 2023. The proposed fines are up to $2,000 (£1,650) for those hotels, resorts and holiday apartments that do not comply. The bill was approved in April 2019 and is now being considered by the state's Governor Gavin Newsom.

After considering the benefits, InterContinental Group announced its commitment to banning miniature toiletry bottles. With over 5,000 hotels, including Crowne Plaza and Holliday Inn, this ban could have a sizable impact. InterContinental Group claims to use roughly 200m of these miniature bottles in their hotels every year, which could save over 1,000 tonnes of plastic waste.