Recent reports into the health of the Great Barrier Reef and other vital coral communities, such as the coral triangle, have made it ever more apparent that work needs to be done to protect and conserve coral reefs. While CCell is working towards this, growing artificial coral reefs through a simple electrolysis process which also protect coasts from erosion, many other organisations are looking solely at the protection of coral reefs. One way in which they are doing this is by utilising cutting edge 3D printing technology. 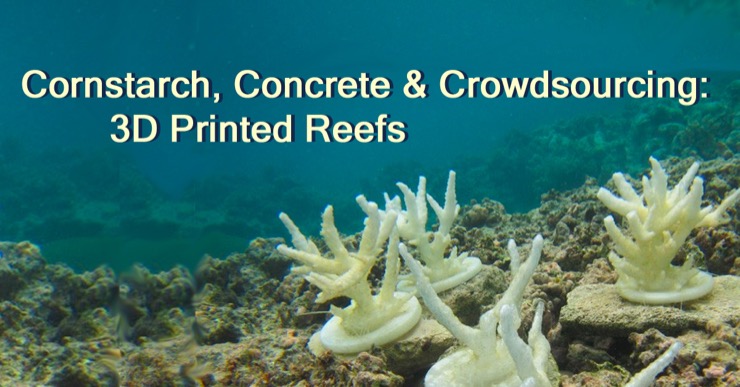 There are many ways we can use 3D printing to restore coral reefs, such as these cornstarch corals. Source: University of Delaware.

One of the most exciting studies is from the University of Delaware, where researchers Danielle Dixson and Emily Ruhl tested the preferences of fish and coral spores on 3D printed reef structures. To create these structures, they took up to 50 photos per copied coral, from various angles, and compiled them into a model. From this, they printed the same structure in four different materials; two types of polyester, which was chosen for its durability and cornstarch with and without stainless steel powder selected for its biodegradability. They used these four identical structures with the original coral in what is described as a Buffet experiment — placing all five structures into a tank with a reef associate fish, Damselfish (Chromis viridis). We recently wrote a blog post about these fish and their sometimes harmful gardening activities.

In this experiment, they were used because they are a crucial player in the reef ecosystem. Their behaviour was monitored over the five habitat options, including how much time they spent swimming or resting within each of them. When they have all the options available, like a buffet, which they choose is vital. Thankfully what was discovered is that the Damselfish did not prefer the coral-based structure over the printed alternatives. 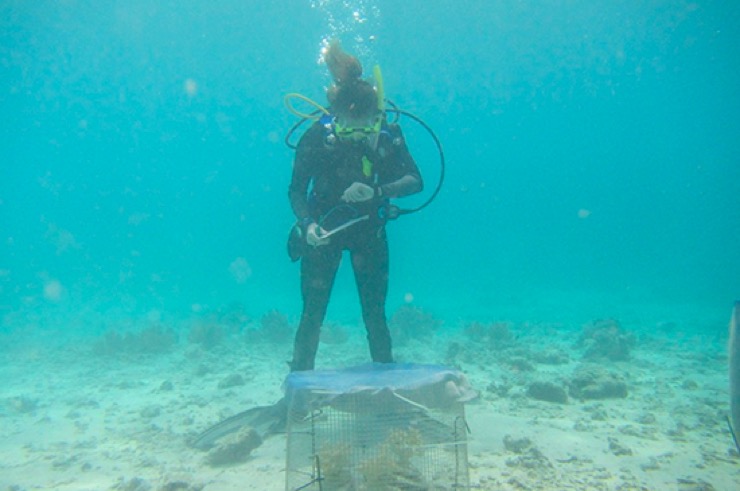 Emily Ruhl studying the habitat preferences of Damselfishin a buffet experement of identical coral structures made of different materials. Source: University of Delaware.

This discovery is vital for two reasons. First, in reef rehabilitation; the biodegradable coral structures could be used as temporary housing for reef fish after hurricanes/tsunamis flatten coral reefs. Keeping the fish in the reef area is vital for retaining reef biodiversity as the reef regrows, especially considering reef-associated fish rarely move more than 15 feet from home over their entire lives. Think of it as giving the fish a hotel to stay in a while their house is rebuilt. By replacing the complex structure of corals with biodegradable models after destructive events, the reef will retain its marine life while it recovers. Secondly, these coral-copies can be used in further experiments. This coral model printing technique will be able to create identical habitats for researchers to use in fish behaviour experiments, allowing them to completely control the layout of the habitat in a way not possible before.

Another thing that these researchers were looking at is how coral spores reacted to 3D printed patches. Flattened coral reefs have less space not only for fish and other marine life, but they also have fewer places for coral spores to settle. Here the researchers looked at the settlement of Caribbean native mustard hill corals (Porites astreoides) on tiles made of different 3d printed materials including nylon, similar to that of their coral experiments. Here they found that the settlement of corals was better on a printed structure than no structure at all; this is probably due to the small cracks and crevices that allow the coral to accumulate.

Their next steps will be continuing research using their printed tiles that will enable scientists to monitor the settlement of specific corals in more detail, less invasively than before.

One company that works on a similar but larger-scale project to this research is Reef Design Lab. They have multiple different projects, two of which are essentially a scaled-up of versions of this research. First is the use of large modular plaques, 3D printed from concrete, with complex, mottled and overlapping surfaces which they attach to existing sea walls. By adding nooks and crannies to the sea wall, they can create living walls, through the settlement of oysters and other crustaceans onto the wall. It is thus improving the biodiversity and general life in the area of the sea wall. 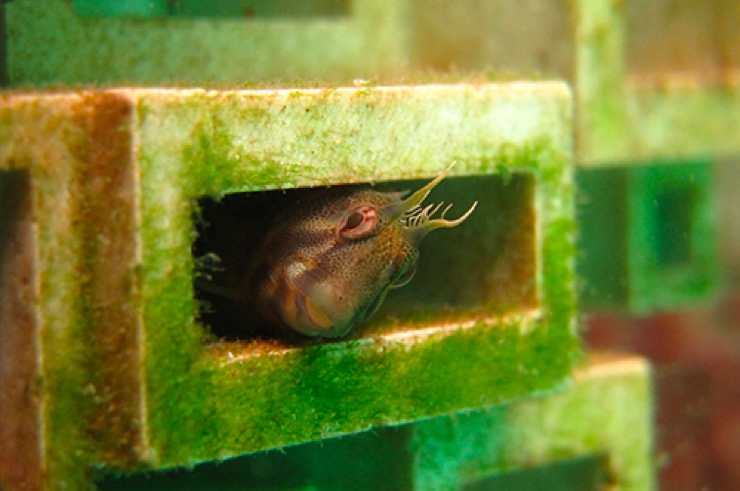 The other side of their work is the creation of large reef structures; the most interesting of these is Modular Artifical Reef Structure (MARS). Made out of modular parts, that don't need a crane or specialised boat, these reefs can be installed and assembled underwater. Their modular shapes resemble balls and sticks that fit together into a structure that looks like the molecular models you probably used in school. Each part is made of a ceramic shell which is then filled with concrete. As a small scale reef restoration project, this is the best one out there, and we will be interested to see what they do next.

Another project using concrete to create reef structures is a collaboration between a french marine life restoration company Seaboost partnering with the 3D printing service XtreeE. Using a sand-based concrete, they try to recreate the local reef material as much as possible. They also aim to copy the complexities of natural reefs. By printing the reef piece all in one go, they were able to add intricate and complex patterns to allow for more places for fish to stay safe and more areas that coral spores could land and grow on. 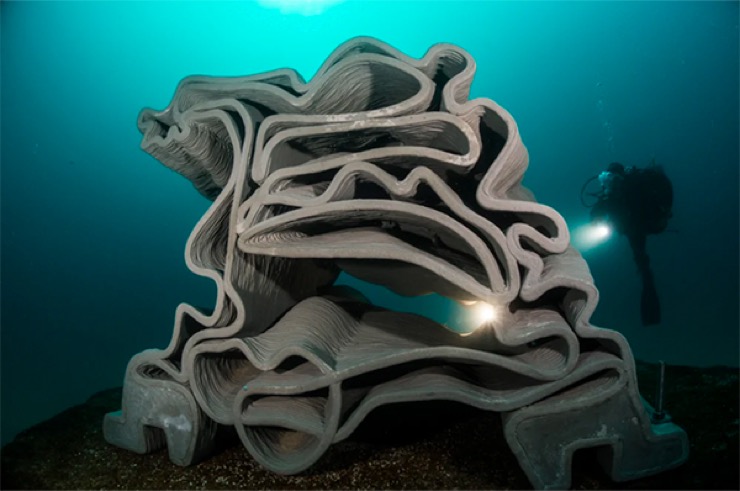 The only issue with these two wonderful ideas is the materials they are using. Concrete production contributes to 8% of the worlds carbon emissions annually, and therefore creating reefs from it may not be the best way to reduce the knock-on effects of climate change. Carbon emissions are linked to rising sea temperatures and increased ocean acidity and of course, climate change. But there have been advancements in 3D printing that may allow for the printing of live coral or limestone in the future.

On a much smaller scale, Hope3D successfully crowdsourced the creation of their 3x3x3ft reef for Project Reef at the Hol Chan Marine Reserve in Belize. They built it by outsourcing to anyone with a 3D printer. To print a piece, you had to sign up, and a schematic would be sent to your email. Fragments of this reef were sent in from all over the world. While this is not great in terms of air miles, the scale of community involvement is commendable. The reef parts were made from PLA, which is a byproduct of the dairy industry; however, it creates a plastic-like substance and would have no real spaces for coral spores to settle. Materials aside, the idea of this reef is a wonderful one.

Although we are not using a 3D printing technique, we are using a method that allows us to pull natural minerals out of the seawater around our steel base. This base provided the template to grow rock in any shape imaginable. The build-up of calcium carbonate (Limestone rock) around the steel is similar to that of printing. Where we differ is that ours is a dynamic process, the reef grows over time, strengthening, gaining complexity and crucially helping to boost the growth of corals that attached or planted on to, it. Another way in which we are different is that we use limestone, not concrete, which means that we are using the same material as coral skeletons. This growth-boosting technique has been used for over 25 years but never before on the scale we are proposing. Our technology might benefit from the initial incorporation of cornstarch 3D printed corals, while the living corals on our reef begin to grow. Allowing the local marine life to start to migrate to the reef structure, would kick off biodiversity.

We are excited to see where advancements in 3D printing will take coral restoration, from printing live corals to further crowdsourcing the building blocks of a reef. By getting more people involved in this important undertaking, we may begin to turn the tide on reef destruction.