Are Robotic Jellyfish the future of reef management?

Researchers at the Florida Atlantic University have created a palm-sized robotic jellyfish that can float along ocean currents and monitor key variables like erosion and oxygen levels.

Measuring only 20cm, with nine tentacles and a soft, stretchy coating the JenniFish is named after Jennifer Frame, a student who helped develop the original prototypes. The prototype designed by Dr Erik Engeberg and his team at the Department of Ocean and Mechanical Engineering. Its bioinspired design can swim in a similar way to its inspiration, the Moon Jellyfish (Aurelia aurita). 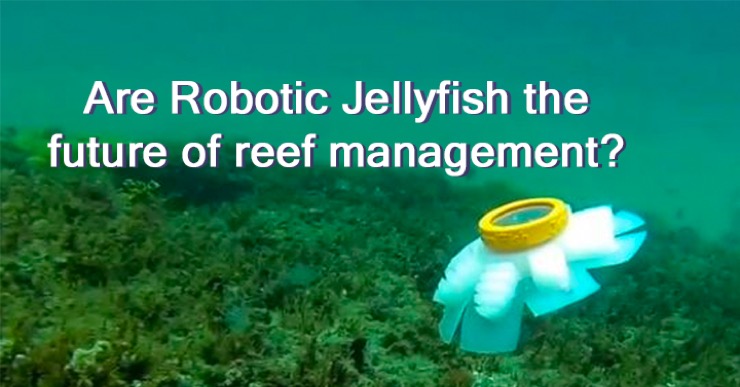 Are JenniFish the future of reef management?

How is the Jennifish bioinspired?

Bioinspiration/biomimicry draws from the lessons learned by nature, sometimes over the course of millions of years, and applies them to artificial systems, Engeberg explains. The Moon Jellyfish (and others) have evolved to eject water from their bodies by contracting their muscles, propelling them through the water, to conserve energy they also float along on currents. This was the key area of difficulty for Engberg and his team, but they eventually developed a self-propulsion system. Pumps control the JenniFish's movement in three dimensions by expelling water from actuators in the tentacles that can be filled and released when needed. This form of bioinspiration has been seen with other Jellyfish projects such as the much larger prototype, Cyro; a 1.7m robot under construction at Virginia Tech College of Engineering.

Mimicking the natural way jellyfish float on currents, the JenniFish can also drift-dive. This was demonstrated in initial tests where it was released into the Gulf Stream. It was able to ride the current and angle itself to float towards an area of interest. These could be anything from algae to red-ide or an area of erosion which can be detected by sensors in its microcontroller, or “brain”. They can detect its orientation and track water temperature, depth, and plankton and algae levels.

The flexibility of its glow-in-the-dark rubber cast also allows it to be able to fit through small spaces enabling remote monitoring of hard to reach areas. 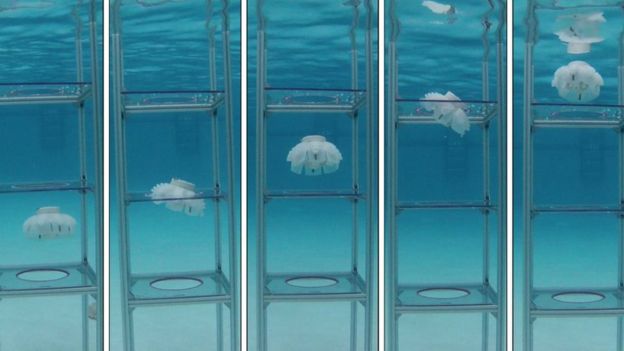 The JenniFish squeezing through a tight hole, this may be useful in monitoring previously inaccessible areas.

How does this compare to traditional devices?

Though the JenniFish's swimming techniques are slower than standard submarine propellers, this makes it ideal for monitoring fragile ecosystems like coral reefs. The Jennifish will not move fast enough to cause much damage should a collision occur. Its method for swimming is also highly energy-efficient, meaning it can have longer battery life.

Unlike other underwater vehicles/drones that have been suggested to be used in monitoring coral reefs, such as Trident, the JenniFish can swim untethered. Unfortunately, the jerky movements of the Jennifish would not make it ideal for video or sound recording. But other sensors could be attached to allow it to become a long-term monitor of an area's conditions.

The extended battery life, combined with its potential to swim untethered, may be a problem as the JenniFish could wander off or float away on a strong current without supervision. "It is important to track their locations so that they can be retrieved after a mission," said Prof Engeberg.

One of the future problems for the JenniFish technology is that it may be too realistic. Making it a possible target for turtles that may confuse it with real (edible) Jellyfish, warns Prof John Turner, a marine biologist at Bangor University. One way around this may be to give the Jennifish an “unpalatable” flavour or to install acoustic warning devices to warn of possible predators. Many adaptations may have to be made to ensure that no marine life is harmed by accidentally ingesting this fledgeling technology.

The JenniFish device is still in its preliminary stages. While it has already collected data on test dives along the ocean floor, future prototypes will collect data from coral reefs. It will look to measure the damage that climate change causes. The data it receives will be vital for monitoring the health of coral reefs. Further iterations of this design could someday come in handy monitoring the artificial reefs, like those installed by CCell.