An Early Warning from Coral Spawning

The intricately timed spawning events of several coral species may be getting more erratic, serving as an early warning system for their possible decline.

Relying on many factors, from the phases of the moon, sunset time, sea temperature and windspeed, "Coral spawning, often described as 'the greatest orgy in the world,' is one of the greatest examples of synchronized phenomena in nature," explains Prof. Yossi Loya of Tel Aviv University. Prof. Loya and PhD candidate Tom Shlesinger have spent the last four years monitoring spawning events in various areas of the Red Sea. Since 2015 they have performed over 225 field surveys during the annual coral reproductive season between June and September each year. The field surveys were conducted at night and could take anything between three to six hours as they recorded the spawning of each coral species.

An Early Warning: badly timed spawning events are leading to a decline in juvenile coral populations.

How do corals mate?

Corals are capable of reproducing both sexually and asexually. When a parent polyp reaches a certain size, clonal polyps can bud off and produce new coral colonies. Many species can also produce male or female gametes (sperm and egg cells). They release these at the same time as other members of their species in a process known as broadcast spawning. With some species of coral synchronizing to within the same half-hour, coral spawning is a sight to see. Shlesinger, who has witnessed it in varying conditions all over the world, describes it as “a colourful snowstorm”. Colourful gamete (sperm and egg) bundles are released from the coral and float away in a cloud formation. Synchronization is crucial for coral species as the chances of the sperm and egg meeting is slim. Once the gametes combine they from planulae, the free-floating larval stage of the coral life cycle. To ensure survival, corals produce a lot of gametes (sperm or eggs) to create as many planulae as possible. The time between formation and settlement, on a reef or in favourable conditions, is critical and most planulae do not survive this stage.

What did they find?

Five species of coral were studied and compared to a similar study done on the same species between 1980 and 1983. The spawning of three of the five species had become erratic. Instead of releasing all within one night, individuals of each species gave off small asynchronous bursts of spawning. One example of this was the Brain Coral, Platygyra lamellina, who in 2018 would spawn in big clumps every night from June 12 to July 18. These releases were not sufficient to create the “soup of gametes” needed to make fertilization more likely, especially after predation from fish.

To assess what effect this disorganized spawning was having on the coral population Loya and Shlesinger looked at the populations of juvenile coral. They found that for the three species that were now spawning more erratically two had no juvenile population at all and the third was severely limited. This indicated that the population of these species was ageing with no renewal from younger generations. These findings lead them to believe that “some species that currently appear to be abundant may actually be nearing extinction through reproductive failure”.

This process of split spawning has been observed in nature before, explains Taryn Foster, a coral biologist at the California Academy of Sciences in San Francisco. Working off the coast of Australia, she observed that every two or three seasons corals on Scott Reef would release their gametes in two separate bursts. This process worked like a leap year, where the coral re-adjusted to the way moon phases cycle faster than annual cues, thus bringing about more synchronicity in the next season. However, the small, sporadic and extended releases seen in these Red Sea Corals were unlike these roughly equal and well-timed releases, leading her to worry about the fate of the out-of-sync corals. 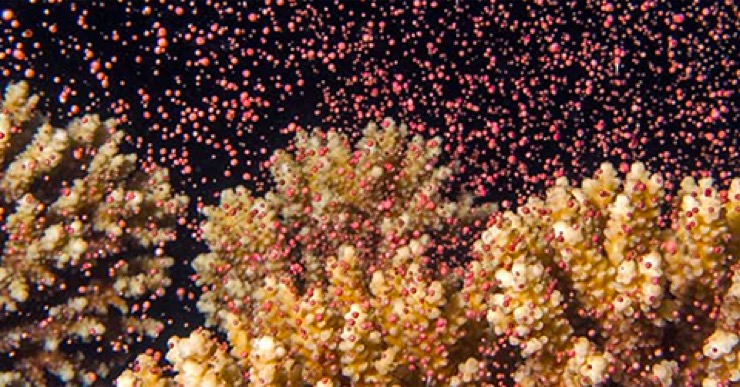 What could be causing this?

A combination of factors are contributing to this decline. First is the rapidly rising temperatures in the region. The water in their studied area was warming at a rate of 0.31 degrees Celsius per decade which alone has a harmful effect on Coral Spawning. Warming oceans make it harder for coral to discern the time of year and to synchronize their gamete release. Confusion within mating patterns is what can be a “sub-lethal” effect of ocean warming. While it is not as apparent as coral bleaching unsynchronised spawning as a result of higher temperatures will still lead to coral mortality. Another plausible factor is the accumulation of hormonal/endocrine-disrupting pollutants; these are present in marine environments due to ongoing pollution from human activity.

What can be done?

While the report proposed no direct course of action to combat this problem, Shlesinger noted that these reproductive mismatches could act as early warning signs for the stress and mortality of coral species. By identifying vulnerable populations before there are any more visible and irreversible signs, future research and conservation efforts can be directed to reduce their decline. The importance of a sustainable ocean economy was discussed in a recent report published by a High Level Panel for a Sustainable Ocean Economy. As well as detailing the importance of scaling up ocean-based renewable energy sources, the report highlighted how essential it is to protect the vital coastal and marine ecosystems. Areas such as coral reefs, seagrasses, mangroves and salt marshes are effective as carbon sinks, coastal protection and marine habitats.

Here CCell knows how to help. Harnessing renewable energy made by ocean waves, we create beautiful artificial coral reefs that allow coral to grow at 5x their natural rate. These reefs provide a natural barrier against sea storms and coastal erosion while supporting an essential marine ecosystem and providing local jobs through its construction, maintenance and eco-tourism potential. The reef is stocked and restored using coral hatcheries. Combining our technology with the early warning identification of at-risk corals and a concerted conservation effort, we should be able to limit the degradation of vulnerable coral species and secure a better future for our ocean.