Scientists have discovered up to 30 species of Coral that have adapted to live in climates harsher than 2100 ocean predictions.

With the long-term outlook of the Great Barrier Reef dropping from poor to very poor, due to back-to-back bleaching events and warming seas, combined with the catastrophic damage of storms, it's future is left looking rather bleak. Thankfully some good news has come through on several species of resilient Coral growing right under our noses. 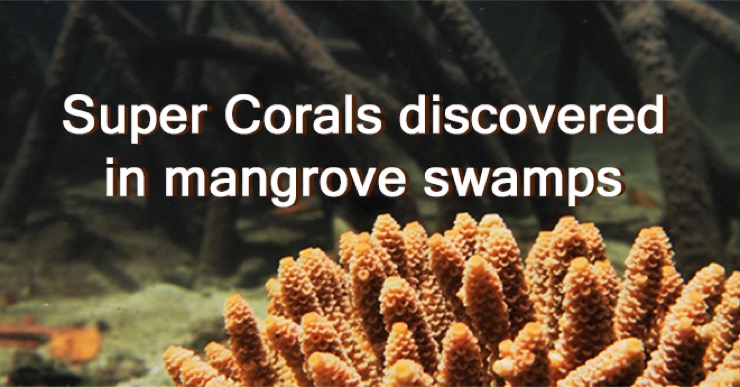 How do you find Coral that survives?

Dr Emma Camp from the University of Technology Sydney explains that they flipped the script in the way in which they found these extraordinary corals. Usually, she explains, scientists try to look for corals that have survived bleaching events and other hazards in affected areas. They study the pockets of survival which, even if the Coral survives the hazard, it does not have enough time to recover before another hazard occurs. Scientists try to identify how the Coral survived. Sometimes it is due to a genetic advantage or sometimes just luck if the Coral's position was sheltered enough from the effects of the event.

So how did they do it?

Instead of using this method, Dr Camp looked at areas where corals were already growing. She and her team looked for conditions that were not ideal for coral growth. If there were any coral growing, they would have had to adapt to survive.

They identified two mangrove lagoons which were extremely hot, acidic, and oxygen-lacking. These factors are usually a death sentence for the average Coral, but despite this, they found over 30 different species growing and thriving. Some of the conditions where they found Coral were even harsher than the worst-case predictions for the oceans of 2100. This is good news as these resilient “Super" Coral could be instrumental in repopulating and repairing reefs.

What is a "Super" Coral?

For Coral to be classified as Super, many of the aspects of their survival must be established. This can range from knowing what hazard(s) the Coral can survive, to how long the hazard lasted, to the reason for survival. What is also important to know, is how much Coral survived; if it is a small pocket or a larger area of resistance. Then the trade-offs the Coral made must be assessed; what did it sacrifice to be able to survive and would it be able to survive further changes? Once several of these aspects have been identified in the Coral being investigated, then they are considered to be very resilient or "Super".

What made these Corals Super?

Dr Camp and her team tested the health of some of the corals they found in the mangrove lagoons. What they discovered was that these corals had made trade-offs to survive. The Corals had up to a 35% higher respiration rate. Corals usually rely on symbiotic algae for their energy supply, and this energy derives from photosynthesis. A higher respiration rate means corals are relying on the digestion of zooplankton, so are less reliant on algae. The calcification rate of these mangrove corals was also roughly 25% lower than that of those grown outside the region. Calcification is the process by which corals grow their chalky skeletons. Thus the mangrove corals were growing at a slower rate and had adapted their food sources to survive in these extreme temperatures.

While this is potentially good news for the restoking and repairing of coral reefs, "There is a lot we don't know," warns Camp. She is looking to explore whether the corals have hit their limit for adapting to extreme conditions. Crucially, she aims to see if they can survive similar stresses if transplanted into a different environment, such as a destroyed reef system. Further research is needed to fully understand the applications and adaptations of these Super Coral but their unexpected discovery is a small ray of hope.